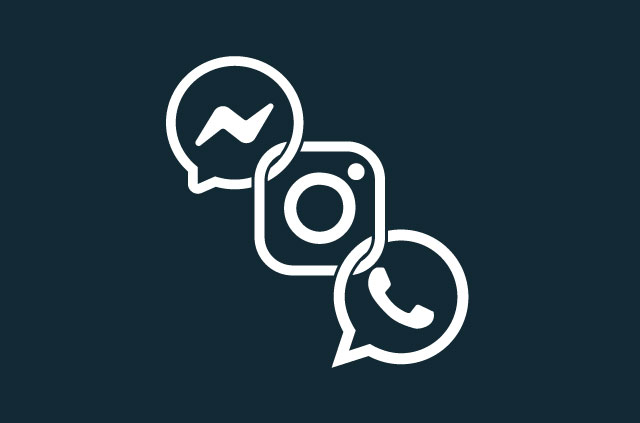 Facebook founder Mark Zuckerberg recently announced plans to merge his three dominant messaging services: Instagram, Facebook Messenger, and WhatsApp. The goal, according to Facebook, is to create a more unified service across all three platforms.

“We want to build the best messaging experiences we can; and people want messaging to be fast, simple, reliable and private,” a Facebook spokesperson said.

With these services integrated, users will be able to easily message one another from different apps. But while the merger may make these services more convenient, it doesn’t necessarily mean they’ll be more secure.

Encryption as an afterthought

The decision to merge these services has both lawmakers and privacy advocates scratching their heads. Zuckerberg has already stated plans to make each of the three messaging apps encrypted, but the real question is how.

WhatsApp was one of the first messaging services to offer end-to-end encryption, while Messenger offers customizable encryption features that need to be turned on manually. Instagram, however, offers no such protections (or options).

Will Instagram and Messenger be retooled to offer the same privacy settings as WhatsApp? Or will WhatsApp be downgraded with weaker security software to help it function like the other apps?

These are just a sample of the dozens of questions security experts are asking.

The second problem is that the increased access to metadata. As the article points out, WA users register with a telephone and FB users don’t. I suspect FB has already done a lot to link these identifiers together, but cross-app comms will be even more effective. 7/

What’s more, how will the login details work? WhatsApp users currently need to only enter a valid phone number to use the app, but Messenger uses the information populated from Facebook—including your full name and email address.

Any move that attaches more personal information to individual accounts could make WhatsApp less secure, which for most of its 1.5 billion users could make a significant impact on how (or if) they decide to still use it.

A matter of convenience… or control?

Zuckerberg has already stated that the goal is to improve functionality across all three platforms, but that seems like a difficult task given that each service serves a different purpose.

But here’s the thing: WhatsApp is still the world’s most popular messaging platform, with a heavy following in South America, much of Europe, and other swaths of the world. It’s often touted as one of the most secure messaging apps around. By streamlining these services so people can cross-communicate within their respective apps, it means that all three apps will need to become more homogenous—whether with their encryption protocols, login credentials, or any other way is still unknown.

On the flip side, if Facebook were to dial back the amount of data collection and up the encryption settings on its other apps, this could end up being a great step toward a more secure and private internet.

Still, considering the founders of both WhatsApp and Instagram left after Facebook acquired each company is a little telling and could be a sign that there’s more happening behind the scenes than industry execs are letting on.

Could plummeting stocks be pushing this change?

There’s no question Facebook’s facing more government scrutiny than ever before, and experts are already speculating that this merger is being done pre-emptively before the U.S. is able to enforce new laws that could effectively punish Facebook for buying up all the competition.

Already, the Irish Data Protection Commission (DPC) has publicly demanded that Facebook reveal more information regarding the merger, and leaders in Washington are also voicing concern.

“Facebook and Google’s dominance over data has already harmed consumers and the economy. The FTC and the Department of Justice must take Big Tech’s invasive, anticompetitive practices seriously and begin to vigorously enforce our laws,” Senator Richard Blumenthal recently told The Verge.

With so many different social media sites floating around these days, it’s sometimes easy to forget that most are controlled by only a handful of companies. Much like how cable companies and internet service providers (ISPs) in the U.S. are controlled by two or three flagship businesses, many social services are simply offshoots of a bigger brand. Twitter owns Periscope, Gnip, and obviously TweetDeck, while Facebook also owns Oculus and Masquerade.

Integrating Facebook’s multiple messaging services could potentially give the company more sway among fledgling users, but it could also help the social media giant secure its stranglehold on the marketplace, which has been slipping in recent months.

You may want to consider using a different messaging service

With more than 2 billion active users, Facebook is still the undisputed king of social media. However, recent privacy scandals and shady business tricks have left many users feeling less than optimistic about the company’s future. In fact, stocks dropped roughly 20% in 2018, though analysts are predicting a strong uptick in 2019.

While the merger isn’t set to take effect until 2020, WhatsApp users may want to start looking for an alternative messaging service. We’ve covered a handful over the years (spoiler: Signal’s one our favorites), and while these services may not offer the same cross-functionality as Facebook-owned messengers, each is arguably more private.

Get a digest of ExpressVPN’s best blog posts delivered to your inbox.

In a win for privacy advocates, DuckDuckGo can now be your default search engine...

The founder of Yale’s Privacy Lab is worried by the coming age of surveillance...

The fight for your face: The battles deciding the fate of facial recognition

7 times the internet was gloriously ridiculous

Why Facebook is the tool of choice for government manipulation

Your devices are rating you. Behave accordingly.

Previous articleFaceTime flaw lets people hear you, before you even answer
Next articleWhat are botnets, and how do you protect against them?

Related postsMore from the author

In a win for privacy advocates, DuckDuckGo can now be your default search engine in the EU

This one device can protect your entire home network